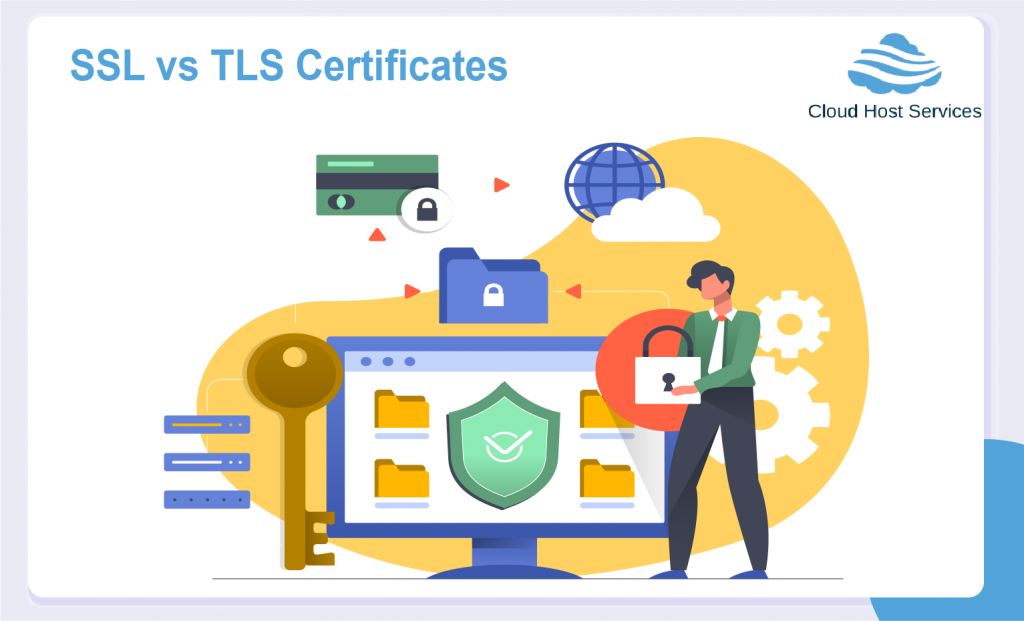 The protection of data sent between the two parties from outside attacks is one of the most important security precautions for any customer-facing organisation. Customers and data recipients cannot feel safe if data privacy is compromised. You can ensure the data sent over-the-air is secure by using SSL and TLS certificates, but which of these certificate types is best for your company?

What is the difference between TLS and SSL?

TLS (Transport Layer Security) and SSL (Secure Socket Layers) are protocols that provide authentication and encryption when data is transferred between devices on a network or through a web server. Following a number of high-profile exploits in the early 2000s, serious vulnerabilities in SSL were discovered, resulting in TLS becoming the standard for authentication.

Although the protocols are distinct, many people are confused by the interchangeability of the terms TLS and SSL. When people say SSL, they’re referring to TLS. TLS is now the most widely used encryption standard, and it is frequently used in conjunction with other internet protocols like HTTPS, SSH, FTPS, and secure email.

It’s important to remember that when comparing TLS and SSL, It is the older protocol. It was created by Netscape and first appeared in 1995. After a number of vulnerabilities were discovered in early versions, it advanced quickly, reaching version 3.0 (SSLv3) by 1996. TLS, meanwhile, debuted in 1999 as a new—and more secure—version of SSL based on SSLv3.

What are SSL Certificates?

The main purpose of Secure Sockets Layer certificates is to bind a cryptographic key to an organization’s web server in order to protect data transfers when someone connects to that server. It works by establishing a secure connection between the two parties, allowing data to pass between them without being influenced by third parties.

This secure connection between the web browser and the server is used for a variety of purposes, including credit card transactions, data transfers, and website security, among others. The transfer protocol HTTP is the most common occurrence of SSL certificates that users encounter on a daily basis. If a link begins with HTTPS, it means the site is protected by an SSL certificate. HTTP is insecure if it does not have a certificate.

It encrypt and protect messages/data sent between the browser and the server using public key cryptography. The server sends its SSL certificate when a user connects to a website. The user’s device then verifies the certificate’s trustworthiness by comparing it to Certificate Authorities (CA) that the device already trusts.

Both parties’ identities are confirmed during this process, ensuring that their information is sent to the correct location. The data is then encrypted and securely sent once this has been established

To make these secure communications possible, you’ll need to obtain SSL certificates from a publicly recognised and trusted CA. A user accessing your website without a trusted certificate will receive an error message before being directed to the site. The error message will state that your certificate is untrusted, which is a major red flag for most users and can be extremely damaging to a company, particularly an e-commerce website.

Company like Cloudhostservices is the most trusted SSL certificate provider.

What are TLS Certificates?

SSL certificates have been upgraded to Transport Layer Security (TLS) certificates. SSL certificates are a first-of-its-kind cryptographic protocol that is becoming less effective in today’s networking environment, even though they can still be useful (which we will explore more later in this article).

TLS certificates do the same thing as SSL certificates, but they’re more secure and up to date. They establish a secure connection between two parties, use public-key cryptography to verify their identities, and prevent data from being intercepted by outside attackers.

SSL and TLS, as previously stated, perform the same functions and can both be effective. However, organisations that are concerned about security are more likely to choose the most recent version. TLS has a number of advantages over SSL that businesses should consider when developing their systems.

Different cypher suites can be supported by TLS and SSL. It supports the Fortezza cypher suite, whereas TLS prefers suites that have better standardisation processes. RC4, Triple DES, AES, and IDEA are just a few of the encryption suites available.

A hash facilitates the handshake process, which confirms the identity of the server and browser. The master secret and pad are included in the hash calculation in SSL, whereas TLS calculates the hash over the handshake message.

SSL combines key identity details and application data as needed when authenticating a message, whereas TLS uses HMAC to protect and confirm the identity and validity of the messages sent.

TLS and SSL have the same function, but how they go about protecting communication differs significantly. SSL, like many other technologies, is out of date, so it’s best to protect your users with the most up-to-date technology.

Our expert team is here to help with any questions you have regarding our products or services. ​